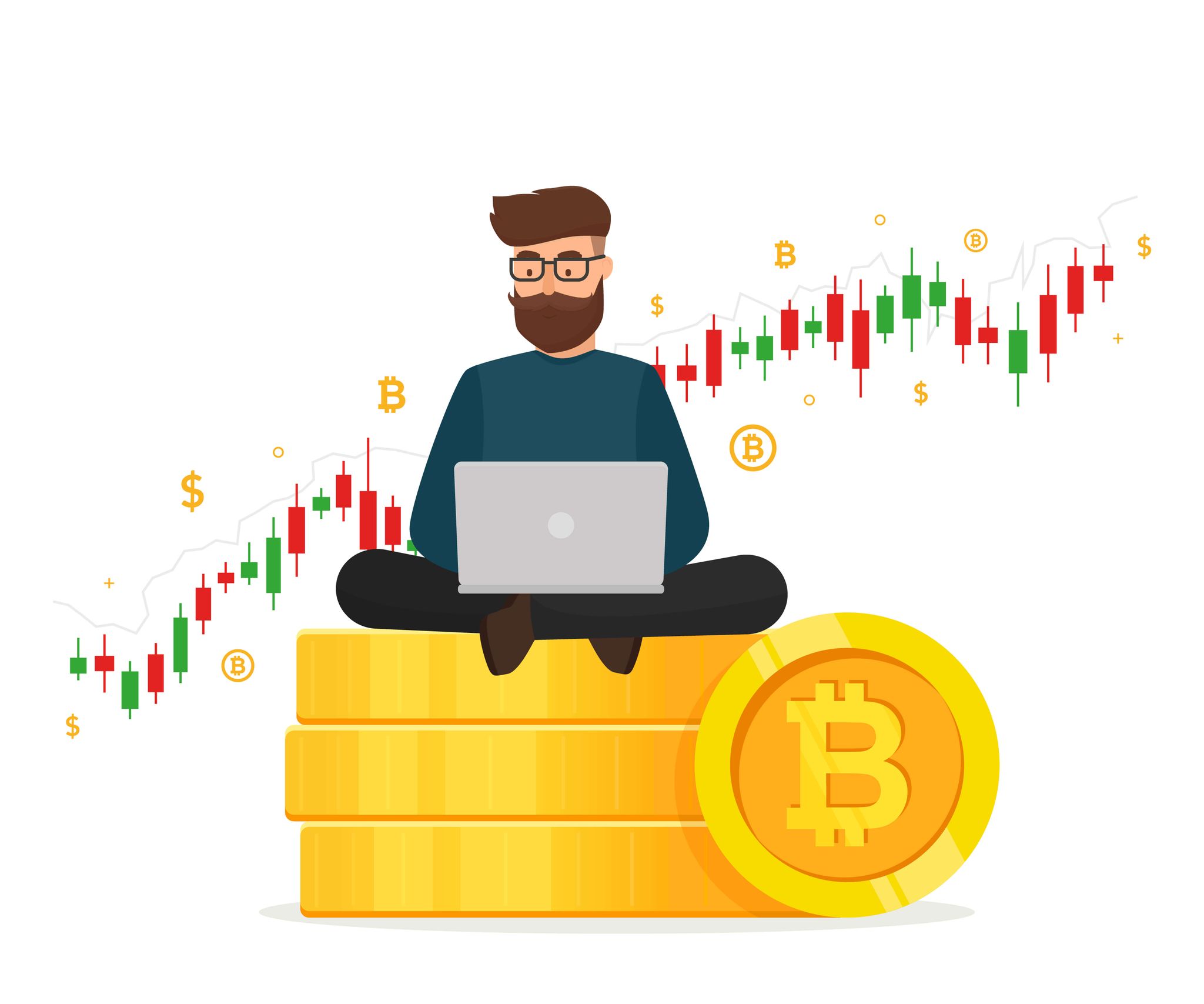 The cash in our pockets is controlled by a central bank and supported by the government. On the other hand, Bitcoin's financial system is run collectively by everyone worldwide who uses it. This makes Bitcoin's system decentralized, censorship-resistant, secure, and borderless.

Bitcoin is a digital currency created from open-source software. This means that there aren't any bills or coins to hold in our hands, and anyone with internet access can send and receive them. Bitcoin, proposed in 2008 and created in 2009, is the oldest and most traded crypto. As a reminder, bitcoin (lowercase b) can refer to the technology while Bitcoin (uppercase B) is referred to the tradeable asset of the blockchain. The tradeable asset Bitcoin is also known as BTC.

How does Bitcoin work?

Bitcoin uses a blockchain to record and secure transactions. Transactions are grouped into blocks that get added to the blockchain. Instead of digitally handing someone a bill or a coin, we can think of a BTC transaction as adding a line to a public ledger that shows every transaction of everyone that has used Bitcoin.

In the example above, if Bob ends up sending 2 BTC to Jake, everyone knows Bob is good for it because we can see on the public ledger that Bob received 4.17 BTC from Alice and Carol. Once Bob confirms the transfer to Jake, we need to keep in mind that the mechanisms that make the system secure and decentralized also mean that Bitcoin transactions are final or immutable. Bob can't reverse his transaction by adjusting a previous entry to the ledger.

How do we create bitcoins?

Bitcoin has a limited supply of 21 million coins that will ever exist, but not all coins are in circulation yet—as of 2020, 90% of all possible BTC is in circulation.

Mining validates and adds new blocks to the blockchain. The miners are rewarded for their work and get paid a subsidy by the blockchain, thus generating new bitcoins. Mining takes quite a bit of computing power and becomes exponentially challenging as the BTC supply approaches the 21 million cap; however, as BTC price continues to rise, miners still compete to add the next block.

Bitcoin is unique because it has a fixed supply of 21 million coins that will ever exist. Halving events occur every 210,000 mined blocks. These events cut the block subsidy received for mining in half, slowing the stream of new coins into the system until all coins are mined.

What makes Bitcoin valuable to some?

Many investors or speculators in Bitcoin don't spend their bitcoins, instead choosing to hold them for the long-term-known as hodl (hold on for dear life).

Bitcoin has been nicknamed digital gold due to the finite supply of coins available and the lack of ability to print more. These properties allow people to argue that Bitcoin is a store of value that protects against inflation, just like physical commodities today. Holders believe that these traits and Bitcoin's anonymity, fast cross-border payments combined with global availability, and high liquidity make BTC an ideal medium for storing wealth for long periods.

Lending is also becoming an increasingly popular form of passive income. For example, by lending our bitcoins to someone else, we act as a personal bank and generate interest.

Others choose to speculate and actively trade Bitcoin against other cryptocurrencies to make short-to-mid-term profits. Much like day-trading stocks, betting against single or multiple currency movements is hard to get right consistently, and while risks are high, sometimes, the payouts can be enormous.

Bitcoin is not entirely anonymous, but it is pseudonymous.

The Bitcoin blockchain is public, and anyone can see the transactions; however, the transactions show Bitcoin addresses (where bitcoins are allocated or sent) and not the names of their owners. So overall the system is private, and there are ways to make it harder for someone to track what we're doing with our bitcoins.

Bitcoin itself is not a scam. However, people will try to scam us out of our BTC.

Unfortunately, scammers and criminals use Bitcoin in phishing and other social engineering schemes, such as fake giveaways and airdrops. If it seems too good to be true, it most likely is.

The Bitcoin blockchain is not encrypted as the name crypto might suggest.

These resources will give us more depth into Bitcoin!

While the price of one BTC coin can be more than what we have to invest, we can buy fractions of a coin with as little as $15.

The process of validating and adding new blocks to the blockchain in a Proof of Work system. Miners are rewarded fresh coins/tokens in return for using their computing power to validate blocks.

Periodic events that reduce the number of Bitcoins rewarded for mining by half. They occur every 210,000 blocks that are mined.

Bitcoin or BTC is the tradeable asset on the bitcoin blockchain.